A Bad Day of Development – A Stream of Consciousness Journey

Well, not stream of consciousness, more like stream of Internet surfing.

I’ve been working on the business case and business model for an App I’m building and testing. That part is going well, thanks for asking.

For some reason, I woke up annoyed at SaaS deployments. Seriously annoyed. I rarely remember my dreams, in whole or part, but occasionally wake up with a thought stuck in my head, like the dream didn’t finish and is trying to tell me something. This thought, whatever it may be, sometimes ends up as a project or something concrete I can point to. This might be one of those days. That dream remnant (or residue as written here) is likely to come back as I type this throughout my day.

I started my day thinking about feature sets and how to determine if the users were actually using whatever it is that I’ve built. I had a conversation with the head of product development at the company I used to work for a long time ago. The conversation was long ago too. My assertion then was that it would be possible to capture how often an end-user was using a particular feature because we could capture mouse-clicks, times the model was generated, which drawings were opened or closed and use metrics to determine which features were used and not. This data could be another metric for prioritization of our feature set. He wasn’t opposed to the idea (and there more to it than I want to go into here) but it didn’t go anywhere.

With SaaS or any software for that matter, it is in the customer’s interest to know whether their investment has a good ROI. In the old days, I bought some piece of software and didn’t think (much) about ROI. It was a “I need software to do this”. I can buy X or Y. In general terms, X does this, Y does that a bit better, but the user experience blah blah blah. Once I had the software, I didn’t think about the days and months that the software wasn’t being used. But with SaaS, I need to. Or do I?

If I had a car payment (I don’t but I have a rental sitting in the driveway right now), then every day that I don’t use the car is a day when I am “paying” for something I don’t use, right? No probably not. But maybe. Car driving alternatives, like zipcar or the ones in this article, often start from the premise that paying for something while you aren’t using it may be a waste of your resources. If I have a car, rental or not, sitting in my driveway, there is convenience in being able to get up and go when I am ready. I don’t need to look at the bus schedule or wait for a taxi or hope there’s a zip car near by. There’s a digression on “stuff” and having a house payment (rental or not) that I will endeavor to avoid.

I started thinking about turn-signals. My quick response is “they aren’t used very often”. Certainly not when I think that the jerk in front of me should have used one! George Carlin said:

I remember it differently, and something about a turn-signal, but it isn’t the driver in this example that concerns me. I was wondering about usage rates of turn-signal usage. Naturally (for good or ill), my research is USA based. The Brits drive on the wrong side of the road for Pete’s sake. Seriously, they do. Why else would they spend so much time and effort to paint signs to warn people which way to look when crossing the street? Everywhere else, we know where to look, down at the smart phone in our hand, of course.

Turn-signals. Surprisingly*, a quick search of “turn signal usage” reveals very few studies or surveys on usage. Page 1 of a Google search turns up a survey from 2006. That’s usually not a good sign. The first hit is on how to use one at all. Wow. This article from NASDAQ (I read it as NASCAR at first, they don’t use them AT ALL!) claims usage is 50% and that apparently their readers need to take off their shoes to count above 10. That article, however, references this study, also written in 2012, even though the link their article points the wrong place. I originally found the study in this article at TheNewspaper.com and here’s the actual study pdf.

*Surprisingly: I say surprisingly because I am very interested in the coming self-driving vehicle revolution and none of my reading has discussed turn-signals in their claims of improved safety. At least, I don’t remember them doing so. It could just be a case of seeing what you are looking for, like your new car (if you decide to get one), described in the Baader-Meinhof phenomenon. Perhaps the self-driving cars will communicate intent in a different way than visually, but until they are 100% on the road, they’ll need some way to communicate intent to the human (and jerks, idiots, and maniacs) on the road too. My view of the coming self-driving vehicle consequences is very dystopian (which isn’t in WordPress’s dictionary, apparently), but won’t go into it here.

There’s a part of the publication that sent me down another rabbit hole. They reference one of their own previous papers, which can be found here, that uses bad statistics.

They assume 90% usage (that’s an assumption, stated as such, so OK whether I agree with it or not (ps: not)).  They also claim that the US miles driven is about 3 trillion. Haven’t confirmed that total and won’t come back to it (one accurate number and the rest assumptions is just assumptions). Then they claim a turn signal is used once per mile. This is also an assumption but wow, that’s not the USA. We drive long distances. That number seems much too low. But again, assumption. Then they make another assumption that improper usage of a turn signal is the primary cause of a crash 1 / 150,000 times. Also an assumption, though their assumptions are all starting to be OOTA’s (out of their asses). Their numbers, all of which are assumptions by now, and three of them have no studies (that I have found) to give them any sort of veracity, reveal (to them) that 2 million crashes could be prevented if their (spoiler alert) automated turn signal system got the usage to 100%. (Later in the study, they lower that to 1 million, but they had already lost me by then.)

Save 2 million? Out of how many? Did they say? (I skimmed the report. It is long and lost me in their initial framing of the problem and I really was just looking for a ball park number for turn-signal usage, not a business case for automated turn signals – which should be part of the self-driving car anyway and maybe that’s how they make their money)

More problems with statistics: This list of [[road crash statistics Edit 2019-05-16 – link broken, see below]], compares global vs USA (go USA! 12% of the population and we think we are the center of the universe)** and lists costs, injuries, and death, but doesn’t actually say the number of crashes. Isn’t that important?

** OK, that may be harsh. Comparing driving statistics from the USA to those in New Zealand are likely skewed anyway. But so is rural to urban, so there.

Why is it so hard to answer the friggin’ question? I need to be coding.

Seriously, all my searches for “car crashes” with qualifiers like “total” and / or “annual” resulted in death totals. I guess death is bad*** and I had fallen for the “death and stuff” quote before I found out that there is information on the Internet that (spoiler alert) just isn’t true.

*** Another topic for another day.

Even insurance companies, who I thought would be all over this, weren’t. Or may the NHTSA? Surely the government, might know? While I found the NHTSA website hard to navigate, once I knew what to look for (is that a corollary to the Baader-Meinhof, or merely an extension of it?), I found it. 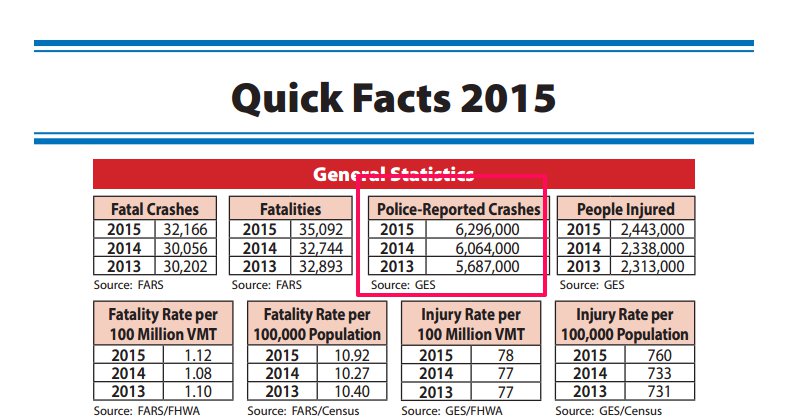 Going back to 2012, we can estimate somewhere around 5.5 million crashes. So, that 2 million crashes saved by improving usage from 90% to 100% and gaining nearly 30% reduction? Nah. That’s BS.

And I’m no closer to determining if I should discontinue a service because only 10% of my users use it, which is how this started. I’m pretty sure they won’t get rid of turn-signals because no one uses them either. But that’s because there is a law, or rather a bunch of laws. That link points to an article on the Florida law. Maybe I could ask my local congressman to get a law that says my App has to be used.

And another rant for another day, if every state in the US has a law for the same thing, shouldn’t we write a US Law class for it and then make all the individual state laws just instances?

I really need to get back to coding.

Crap, there’s also an API to that crash data and that might be where the rest of the day goes.

Closing thought: This is an example of how working from home can go horribly wrong. Thankfully, not every day is like today.

[EDIT: 2013 data for Vehicle Miles of Travel in the US was nearly 3 trillion and covers all vehicle types – source NHTSA]

[UPDATE: If you read the “survey” written by a company trying to sell something (12000 data points!) and then this very short article, I hope you will be as annoyed as I am — count the number of misleading and false statements in the article. The only bias I see here is publish-or-die.]

[UPDATE 2019-05-16: It was pointed out to me that the article at https://www.asirt.org/ was moved or deleted. Either way, I did not find it. This site car accident statistics (also pointed out to me) has data that appears to be valid and well sourced (I didn’t check more than a few).]