Let’s Not Do That, Shall We? 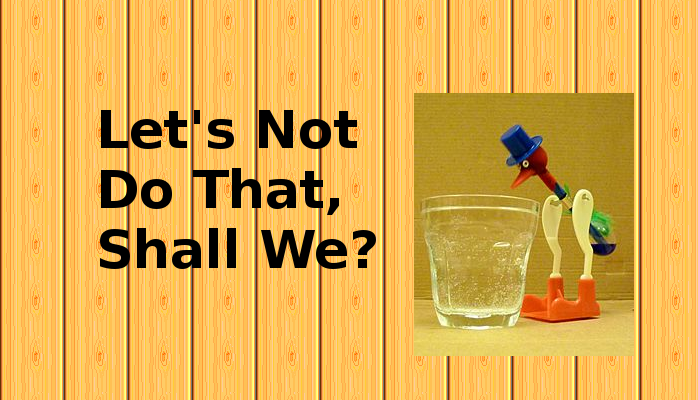 I went to bed angry last night. There’s not anyone else in the house, so that’s OK.

I woke up annoyed, but I have work to do so did not think I’d set aside time to write anything more than that in my journal.

Then I read this excellent post on personal ethics on my lunch break and decided I would make time.

Yesterday, I ordered something from Amazon. Because it is for a project and I needed it quickly, I had it shipped express. I was home all day. My office has two windows that look out over the street. It’s hot, so the windows are open. I can hear every truck and car passing by.
If a truck sounds like it stopped, like the UPS truck did at 4:53pm, I’d look out the window.
I was meeting a friend for drinks later, so was hoping the package would arrive sooner. Around 6:30 pm, I checked the tracking status because it was almost time to let my drinking buddy know I was going to be late. I was surprised to see this (minus the editorial marks):

No door bell, no loud banging. No delivery truck. I was miffed, but not angry.
I went outside. No package. No note. I looked over the fence. No package.
I live in Baltimore. My house has been burglarized (I’m still looking for my hat). Several possibilities for why the package is not where it supposedly is.

I called Amazon. The customer rep I spoke to explained that the package may actually not have been delivered yet.
He went on to explain that the delivery person may have, in fact, said it was delivered when it hadn’t been. As a short cut.
I’m not sure how much efficiency gains there are there, but I’m pretty sure they aren’t worth it.
He suggested I wait until the end of the day (9 pm) to see if it would show up, give them all day tomorrow to see if it showed up, and if it STILL hadn’t shown up, that I should call back.

That’s not why I went to bed angry.

He also implied that it was quite reasonable for the delivery person to say the package had been delivered when it actually hadn’t been.
And that he didn’t understand why I didn’t think that way.

I’ve read Dan Ariely’s book on dishonesty.  You should too.
Knowing the problem does not always lead to a solution.

Consider this the straw that broke the camel’s back or the drop of water that overfills the bucket.

I’m trying to sell my house. I had it staged, even though I’m still (mostly) living here. I couldn’t bring myself to rent towels for two months. Just couldn’t. So I took the decorators choice colors and went to the local store to buy towels (and other stuff). While the decorator and I were going through the house, she said she liked the towels I bought. Would I be keeping them, she asked?

The towels, are you keeping them?

She thought or suggested that I take the towels back to the local store after the house sells (thumbs pressed / fingers crossed).
No. No I won’t be taking them back.
She seemed oddly disappointed.

I had to pay a lawyer this year. As we are going through the document, I’m pointing out words and phrases that seem contradictory or could cause problems to me or the other party if either of us were to actually do/not do what the document says we will/won’t.
“Don’t worry about that. I’ve never heard of anyone pursuing legal action on that.”
Then why is it there at all? Never mind.
I won’t agree to do something and then not do it because I won’t be punished for not doing it.
He seemed oddly disappointed.

I had my taxes done by a CPA this year. As we are going over them, he points out a few places that could be padded and the IRS “doesn’t look at that”. He said he advises all of his clients that way.
No. No I won’t be putting padded numbers on my tax return.
He seemed oddly disappointed.

And that’s why I went to bed angry. I lost my last shred of faith in my fellow humans.
Luckily, my faith bucket is like a drinking bird. It spilled over and resets and now I can start being disappointed again.

Oh, and sometime after at 9:15 pm last night, the package arrived. It was thrown over my 7 ft fence. I found it.

Someone asked me today if I was going to tell Amazon it was broken.

And the first drop hits the bottom of the bucket.

Let’s not do that, shall we?

But I will join 451 others in telling Amazon what I think of their delivery company in my area.