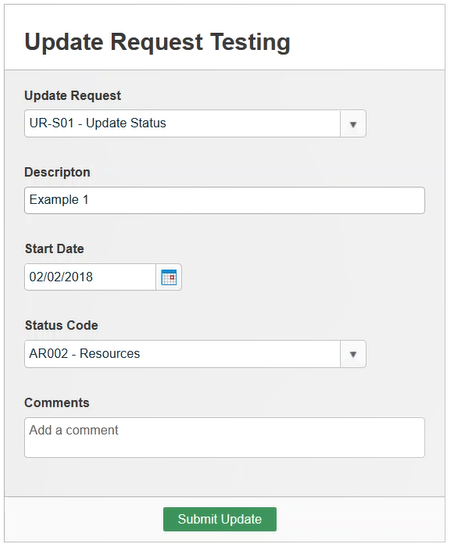 A Semi-Random Walk from Problem to Solution

Warning: The Owner of the Sheet for this solution requires a Business or Enterprise Smartsheet license.

This solution started in an odd place. Looking back on it, it doesn’t  seem so odd but at the time, I didn’t know where I would end up.

I had a large Sheet, over 100 columns and I want to update some data. I built a Report that showed only a dozen or so of those columns.

But that wasn’t quite good enough.

I wrote a Smartsheet Enhancement Request on why it wasn’t and what I wanted instead. That request can be found here.

As is often the case, both before, during, and after writing an Enhancement Request, my brain keeps going over the problem. “What about an Update Request?” No, those are too clunky to set up on the fly for so many columns.

Sigh. So I put the problem aside, not realizing I had just stumbled past the solution.

About an hour later, I got a Notification email. I get a lot of those.

I started looking at the Notifications I was getting from the Sheet. Those weren’t as useful as they could be either. Too many columns, when only one or two columns changed.*

I opened up Alerts & Actions to fix the Notifications and then all the sort of pieces slipped together.

I was already sending myself Notifications. Why not Update Requests too?

Update Requests are one-time links to certain columns in  one or more rows in the Sheet. With the release of the Notification Center in September 2017, Notifications now appear in the upper right of the Smartsheet window, with a red circle for the new ones.

What I wanted to do was get specific update requests for the columns I was most concerned with at the moment. Something like this: 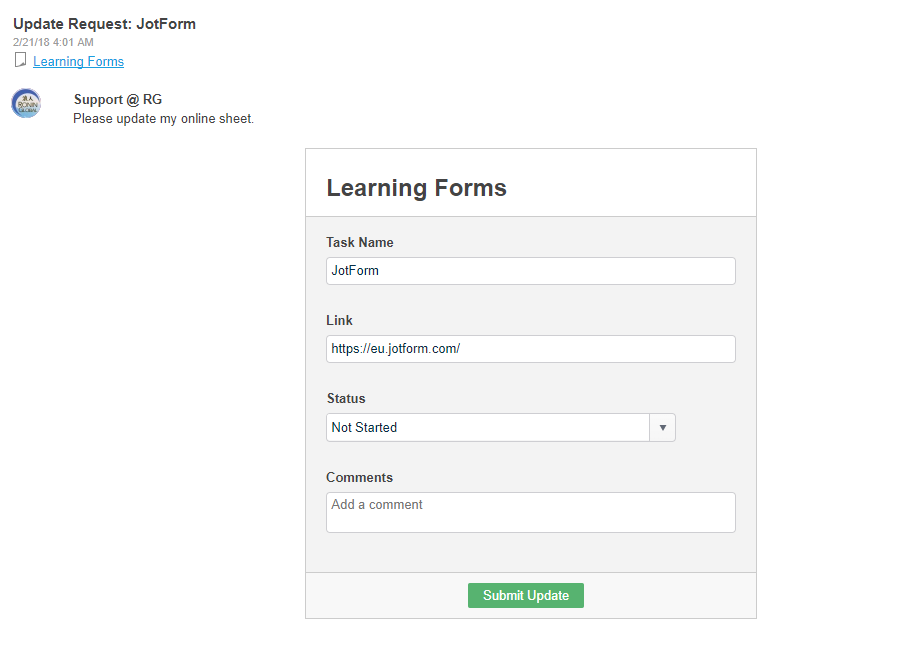 And I didn’t want just one.

Some way to trigger them

First, I created a new Dropdown List column. Because I am not as clever as I like to think, I named it [Update Requests].

I knew I will want to remember which Update Requests are which, so I gave them unique names. 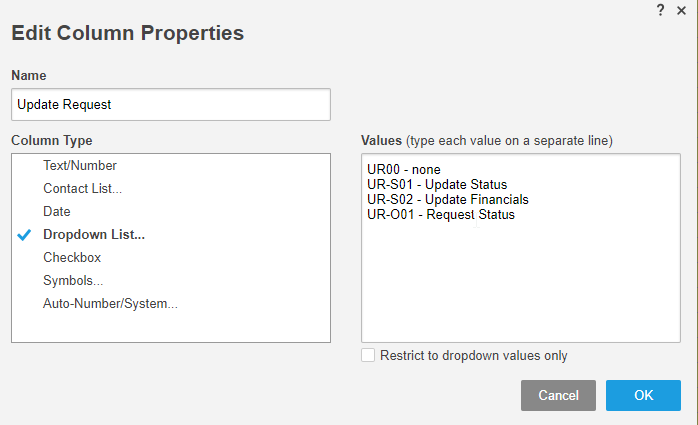 Next I set up the Update Requests that I had in mind. Two of them I will be sent to myself and the other that I will be sending to someone else. 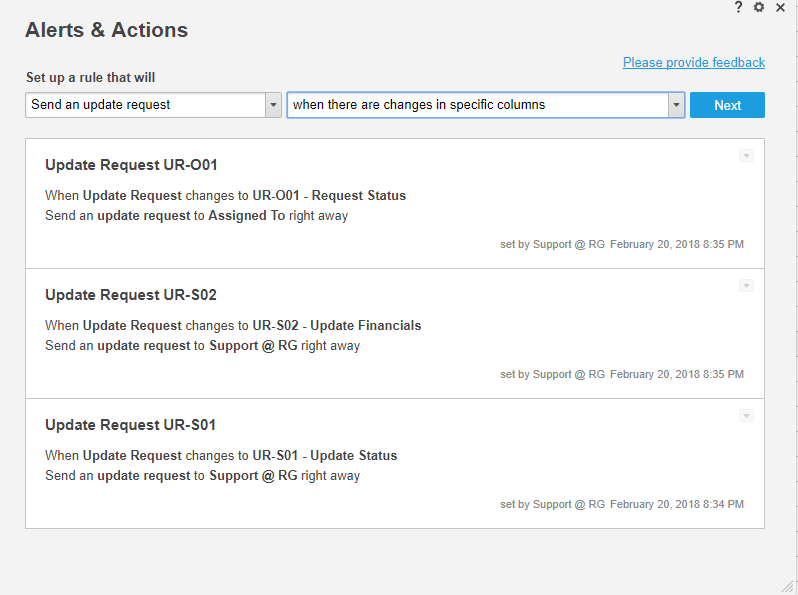 and then the Delivery Settings 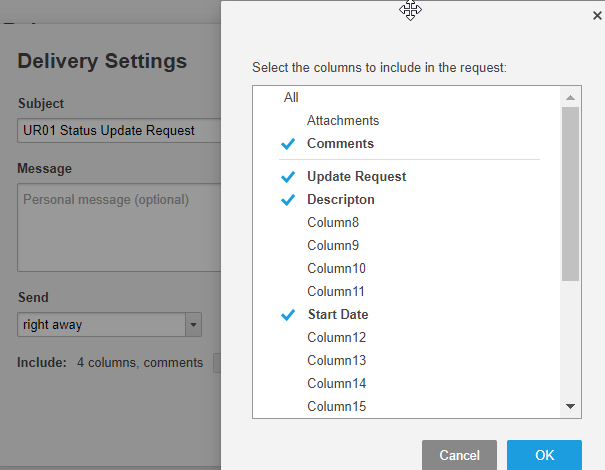 the most important settings being the choice of columns to be available for update.

This is repeated for the other preset Update Requests.

Back on the Sheet, now I can select one of the preset Update Requests using the [Update Request] dropdown column.

Within about 10 seconds (rarely longer), I get a Notification and can quickly update only the columns that I need to for this particular task. 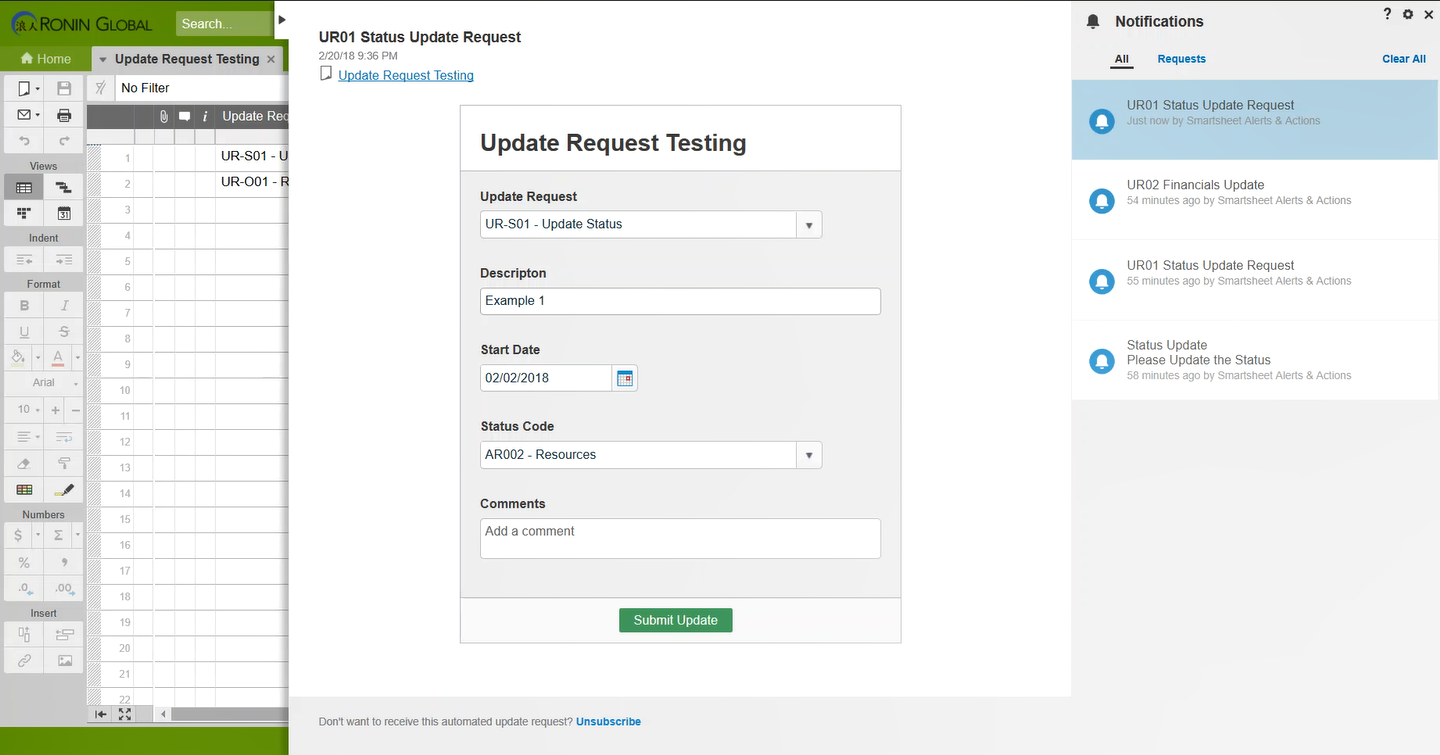 I was quite surprised at how easy it was to setup and use.

I used to setup Reports for this sort of ‘only need to set a few columns’ sort of editing. I still will. But for single sheet editing, I found the Update Requests easier to set up, and less time needed (even with the 10 second wait) to get to the editing than to leave the Sheet and open the correct Report (especially if there are more than one) or to switch to another browser window. Added benefit is that I also have a record of the update.

*I use that sort (all the columns) of Notification during development as:

What I’ve discovered recently having more projects in progress and several of them continuing longer than usual is that the usefulness of the original Notifications drops off markedly as the project enters its end phase. I’ll still need the full Notification, but I switch to longer times, either daily or weekly instead of right away or hourly.

Craig, thanks for sharing this awesome solution for managing targeted update requests for existing rows of data.

One question i have, is there a way to get it to notify just the current user who changes the trigger column?

I believe I just worked out that if you put the notification to be sent to “modified by” column then it will trigger and send to the user when sheet is next saved.

Is there a way to get it to send immediately without having to click save?

That’s a great improvement! The [Modified By] (and other System columns) do not get updated until saved.

Thank you for your information….but I am looking for a way that my user can request his/her own update request?

So I have players who add their own data on a web form…all is good until they realize that the cell number of something is not correct…..it would be great to allow them to go back to a webform…enter their accountID and email address….and have it update their row.

I have a update request being triggered by a change to the record, so it will send them the fields I want them to complete.

My work around is to immediately send them a update request that they can keep with all the fields, immediately after they add the record, but this may be confusing to them…and they may also not keep it if they want to change something.

Any ideas? Is anyone else forcing smartsheet to take an action on a already created row? Thanks.

Apologies for missing this comment.
I’ll respond by email.

Great content; in fact, my issue is that the users requested to fill a questionnaire with specific questions, but due to the character limitation, if I type the full question on the column title, it is truncated, but….. following your form, what happens if I keep the column just as a title and type the question as prepopulated field !!! it can help to fill the form, preserve the current fields filled and complement the data

That’s a god idea.
Thanks for the compliment.