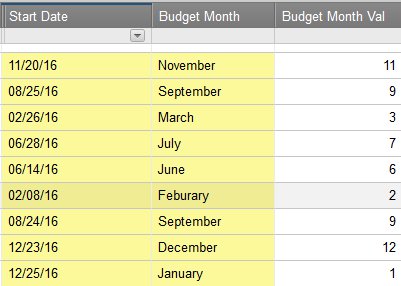 Despite (or because of) being active on the Smartsheet Community (when I have time),  occasionally I get emails to one of the several emails I have added to my profile there. Here’s one I got recently.

Can you please help me figure out a formula for this situation:

I have a ‘Start Date’ column and a ‘Budget Month’ Column. Anything that starts after the 24th of the month falls into the next months budget – For example something starting 1/24 will be in February’s budget.

I don’t always answer them. Well, I typically answer the emails but don’t always provide the solutions. I sometimes get paid to solve problems like these and giving the answers away, for free, I’m told, is bad business.  I have pretty smart friends. But … my time is (mostly) my own, I like helping people, and being able to (help) makes me feel a bit better after a long day. This time, I tossed the business person hat to the side and just decided to answer the friggin’ question.
The first thing I did was to ask a few questions of my own.

Do you already have the formula for the month in text? (The answer was no.)

If 24th (neither before or after, but on), what then?
That is 8/23 – August, 8/25 – September, what about 8/24? (The answer was September)
Even when solving what may be a simple problem, the missing pieces spring out at me and I try to plug the holes before they cause damage later.
If this had been a customer instead of just a casual question, there’s a few more questions that might spring to mind – does year matter? And of course why’s and who’s and so forth, but this is just a simple formula exercise and I’m not on the clock.
When building solutions in Smartsheet, I’m not typically concerned about adding columns. Some people are.
They (the columns, not the people) are easy to hide (not so easy to show again, but that’s a different issue). The intermediate formula results are often useful for other issues and I’d rather do the calculation once than twice or more on the same row. It is also easier to use for someone else to learn from.
The solution is pretty easy (I don’t mean to sound arrogant – I’ve been writing formulas in spreadsheets since Excel 2.0 or maybe 4.0 – or somewhere along then. Yes – that was a long time ago.) . Here is it:

will return a number from 1-12 for the month using the MONTH function.

The formula is ‘wrapped’ in the IFERROR function, because if the Start Date is empty, Smartsheet complains. I don’t like it when it does that.

Would that last paragraph make more sense if written in pseudo-code? Probably.

End result, we now have a value of 1-12 for the month of the budget 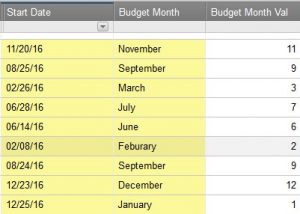 There you go.
Smartsheet’s formulas can do some useful things to help you and your team work better together.
And if you get stuck – check out the Smartsheet Community. There are lots of people there that like to help other users.
p.s. The person asking for this caught me on a good night (for them) as I was trying to figure out what I was going to do while waiting for the next episode of Westworld.